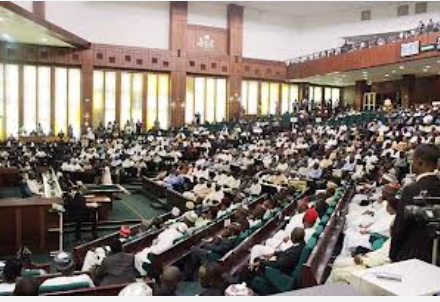 *APC, PDP JOIN FORCES FOR A SHOWDOWN WITH THE NATIONAL ASSEMBLY

There are indications that the two main political parties; All Progressives Congress’s and the people’s Democratic Party, may stage strong resistance against the just passed Electoral Act Amended Bill, 2021.

The reason the parties are crying foul is clause 87 of the amended Bill which provides for direct primary for political parties in nominating their candidates for elective position.

Some Governors on the platform of the ruling All Progressives Congress (APC) have tried at various times to prevail on the National Assembly to halt the process, but the National Assembly on the other hand, muscled the courage to look the other way; passed the harmonised version of the Electoral Act (Amendment) Bill, 2021, without batting an eyelid

They argue that it is the exclusive perogative of any political party to pick and choose either of the mode; direct or indirect mode of primary election, and as such, the option should be left open for the parties choose how to nominate their candidates for elective positions.

An area that obviously boxed the political parties to a corner is the fact that the National Assembly empowered INEC to go ahead with the Electronic Transmission of Election Results.

Another argument advanced against the Direct primary mode is that it will eat deep into the resources of INEC while playing its supervisory role when many political parties are doing their primaries.

The opposition Peoples Democratic Party (PDP) described the passage of the amended version as unacceptable, emphasizing that no party has the right to impose its will on another on the method to adopt in primary election.

The passage followed the consideration of the report of the Conference Committee of the Senate and House of Representatives, which was set up in line with the existing tradition, to carefully scrutinize, clause by clause, the merit and demerits of the Bill before it was passed and awaiting the assent of the President.

21 clauses were harmonised, including the controversial clause 52; which provides for Electronic Transmission of Election Result (ETR) and clause 87 which mandates political parties to adopt the direct primary mode of selection of candidates into elective positions amongst other clauses.

Direct primary gives right to the participation of all party members in the nomination process of party candidates, while the indirect primary is used at the whims and caprices of Governors or party leaders who recriuite their choice party leaders from the ward, Local Government and State executive members to function as delegates to nominate party’s candidates at a congress or convention.

The final harmonisation and passage of the Bill by the Senate and the House of Representatives is a process that started from the seventh, through to the eight and was concluded by the to the ninth Assembly.