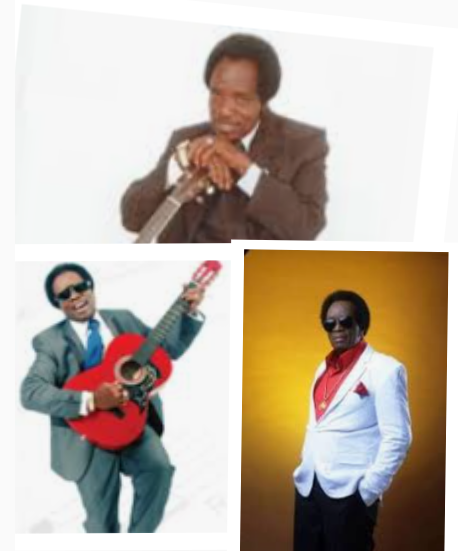 He obtained his secondary school education at the Western Boys’ High School Benin and St Gregory’s College, Lagos, from 1957 to 1961.

He began playing guitar when he was 12 years old, his earliest popular music influences being records of Spanish and Latin American music.

He studied graphics at Yaba College of Technology, Lagos and graduated in 1961-63 at the age of 22 years old.

He received a bachelor’s
degree with first-class honours at 54 years old (Valedictorian) and a
master’s degree from the
University of Benin in 1997 at 56 where he studied Fine and Applied Arts and majored in Sculpture.

After leaving Benin, Uwaifo continued playing music at St Gregory’s, Lagos. He was a contemporary of Segun Bucknor, and they were both among the leading Lagos high school bandleaders at the time.

During school holidays and weekends, he jammed with Olaiya’s All Stars band After completing secondary school studies, he played with E.C. Arinze’s highlife during late hours.

Uwaifo also briefly worked with Stephen Osadebe and Fred Coker before he formed Melody Maestros in 1965.

The band released “Joromi” which became a hit in Nigeria and other parts of West Africa.

Uwaifo made history in
Nigeria when he won the first Golden record in Nigeria, West Africa and Africa (presented by Philips, West Africa) for his song Joromi” in 1996.

In 1969, he launched a new
beat called Shadow accompanied by a new dance also called shadow, a mixture of Akwete and
twist.

The sound was released
when soul music was popular in Lagos and lasted a few years.

After the launch of Shadow, the Melody Maestros went on tour of various Nigerian cities.

Uwaifo later experimented with a new rhythm that was similar to soul but soon left it for Ekassa, an interpretation of a traditional Benin sound.

In 1971, Uwaifo opened the Joromi Hotel in Benin City, and within ten years established his own
television studio.

From there, he produced a national weekly music
and culture programme.

He was the winner of the first gold disc in Africa (Joromi) released in
1965 and seven other gold discs in Guitar boy, Arabade, Ekassa series and Akwete music.

He recorded under the name Victor Uwaifo and His TItibitis.

He was recognized as the most educated performing music legend, musical instrument inventor, and artist worldwide with
a B.A. Honors (first class
valedictorian), Masters degree and Ph.D. in Architectural Sculpture
(Thesis: A reinvention of Benin Royal Ancestral Pieces, University of Benin, Nigeria).

The Federal Government of Nigeria, in appreciation of his talents and contributions to Nigeria, honoured him with a National Honors Merit Award in 1983, which read in part: “.. whereas you have been nominated and appointed as Member of the Order of the Niger to have and hold and enjoy the privileges of the Federal Republic of Nigeria of the said Order, MON” Uwaifo was the first professional musician in Nigeria to receive such an award.

He was a Justice of the Peace and had served in many capacities.

Uwaifo was also appointed the Honorable Commissioner for Arts, Culture and Tourism and Member of the State
Executive Council, the highest policy-making decision body in Edo State from 2001-2003.

In 1995, Uwaifo was invited by the United Nations Staff Day International Committee to perform during the UN Golden Jubilee celebration.

He was an Honorary Member of the Biographical Advisory Council, Cambridge, England; a member of both the Performing Right Society, and of the Advisory Board of American Heritage University, California, US.

He was the first Nigerian to win a gold disc in Africa, (Joromi) released in 1965 at the age of 24 years old.

Uwaifo was the Chairman of Joromi Organization, a multi-track recording and television studio in Benin City.

He ran and managed an art gallery and the Victor Uwaifo Hall of Fame.

He was a Christian and married with children.

He was also a lecturer at the Department of Fine and Applied Arts at the University of Benin, Benin City, Edo State, Nigeria.